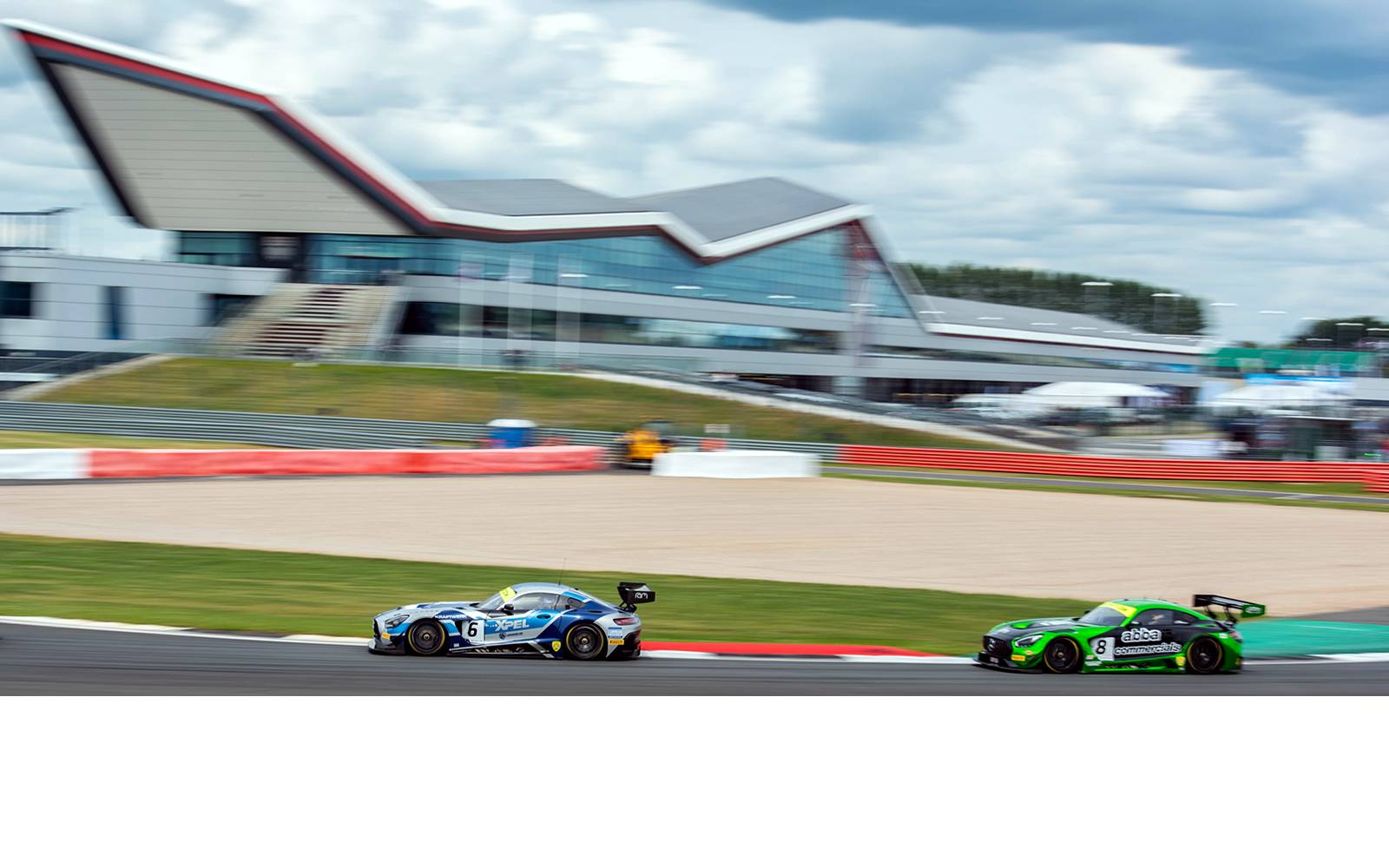 The third round of the British GT championship descended on Silverstone for the first of the seasons longer endurance races, the three hour Silverstone 500. After a successful double race win at Snetterton, Barwell Motorsports Lamborghini Huracan piloted by Phil Keen and Adam Balon sat atop the GT3 championship standings, ahead of their sister car driven by Sam de Hann and Jonny Cocker. Looking to improve on the last two rounds would be the TF motorsport Aston Martin Vantages, which were victorious in this event last year.

In the GT4 class the HHC McLaren of Dean McDonald and Callum Pointon moved to the top of the championship standings at Snetterton, taking over from the Ford Mustangs who looked dominant in the opening Oulton Park round.  An extended grid of 42 cars, including 5 new entries will ensure for exciting racing as teams try and win the historic RAC trophy.

Ollie Wilkinson had set an early fast time, only for this to be taken away for a track limits infringement. This allowed Ian Loggie to get the fastest time on his return after missing the Snetterton round with an injury.  Behind him in the TF Sport Aston sat fellow Scot Graham Davidson in second.

The Pros then took over and it was another Scot in Jonny Adam who set the fastest time in this session for the TF Sport Aston Martin Vantage, in a role reversal of the Am qualifying stint he finished just in front of Loggie’s team mate Callum Macleod. His and Davidson’s combined time was enough to see the Aston on pole ahead of the Mercedes with The Balfe Motorsport Mclaren in third.

The GT4 Am qualifying saw the smaller sibling of the pole sitters, the TF Sport Aston claim the quickest time in the session. Patrick Kibble set a quick time early on which nobody could better; he beat off competition from Angus Fender in the Century BMW and another Aston in 3rd driven by Matt George. Josh Price consolidated TF Sports pole position in the Pro session, whilst Sennan Fielding moved the Steller Motorsports Audi onto the front row. Scott Malvern managed a great qualifying session which moved their qualifying spot up 16 positions after the Am session up to third.

Race day was a dry affair compared to the day before, and the three hour enduro event started with drama on the first lap. Davidson managed to convert his pole into the race lead ahead of Loggie and Balfe going into Copse corner. Further round the lap is when the trouble started as Adam Balon tagged his Barwell team mate Sam De Haan into a spin, the contact handed Balon a ten second stop go penalty and De Haan was forced to pit to fix the damage. In the GT4 category Josh Price also converted his pole position into the race lead whilst James Dorlin made early progress to move up to second.

The top three started to pull a gap on those behind them, and after only 25 minutes Ram Racing tried to gain a tactical advantage by pitting and putting their Pro driver in the seat for the next stint. The stop promoted Balfe in the McLaren into second, and was on the tail of the TF Sport Aston in first, a battle which continued until the first round of pit stops. During the pitstops the leaders of the GT4 category fell short of the mandatory pit stop time which meant a stop and go penalty would allow the Tolman Motorsport McLaren to inherit the lead.

In direct contrast to the Ram Racing strategy both TF sport GT3 Aston drivers did long first stints, Graham Davidson being the first of the two to pit, and Mark Farmer would be the last GT3 car to make the first of three mandatory pit stops and driver changes through the race. The strategy seemed to be working for Ram Racing as Macleod inherited the lead after the first round of pit stops were complete.  Macleod managed the gap to second well through his stint, ensuring that he maintained a gap between him and Bell who was now piloting the McLaren. Seb Morris was the real mover in the JRM Bentley, setting a new fastest lap only a few minutes after taking over from Parfitt. Meanwhile the Team Abba Mercedes was having to retire at the halfway point due to gearbox pressure issues.

Although the GT4 Aston of Patrick Kibble and Josh Price had to serve the penalty for the short pitstop, their pace was so good that they had moved back up to second after the opening hour or so of the race. The Team Parker Mercedes driven by Scott Malvern was on a charge though, and just before the half way mark, they made a decisive move on the McLaren at Brooklands to move themselves into second in the GT4 category. They then began the push to catch the Tolman Motorsport McLaren, which would have to spend extra time in the pits due to the silver driving rankings, as opposed to the Pro Am status of the McLaren.

Even after the second set of pitstops with differing team strategies, the leaders could barely be separated. The Balfe Motorsport Mclaren ahead of the Ram Racing Mercedes, now being driven by Ian Loggie. The charge of the JRM Bentley up the field was held back by a pit stop infringement which would see them serve a penalty. The final round of pitstops saw Jonny Adam the first to come in and take over the Aston for the final stint.  The McLaren came in next, but would have to serve a success penalty which would likely drop them behind the Ram Racing Mercedes. Unfortunately for the McLaren, they also fell foul of a pitstop penalty and had to come back in and serve a ten second stop and go penalty which would rule them out of contention. Leaving the battle between the Mercedes and the Aston.

In the GT4 category another pitstop infringement by the TF Sport Aston would put pay to their chances of winning the race, despite an excellent comeback from an already served penalty. The Multimatic Mustang driven by Seb Priaulx and Scott Maxwell had taken the lead, but they too would suffer a delay in the pits as they would have to spend extra time in their on their final stop due to the combination of having two silver ranked drivers.

The GT3 battle was on after the stops, Jonny Adam had managed to emerge in front of Callum Macleod, but Macleod on fresher rubber was intent on hunting him down. The scrap continued until the final few laps when an errant back marker managed to tag Jonny Adam into a spin, and ultimately retirement. A great shame for the battle between the two of them to end up like that after such close racing. Just behind there was an equally close battle for third as Nicki Thiim got ahead of Seb Morris’ Bentley, taking advantage of Morris’ slight indecision behind a black marker. Nick Jones and Scott Malvern made it a Mercedes double by winning the GT4 category, ahead of Peter Belshaw and Maxi Buhk in a second Mercedes entry.

The JRM Bentley was later disqualified from the race after having found to be underweight in Park Ferme checks, which promoted the WPI Lamborghini onto the podium. The Mustang which finished in second in the GT4 class was given a thirty second post race penalty for a pitstop infringement, promoting the Beechdean Aston into third place in the GT4 category.

Despite the early incidents involving the Barwell Motorsport Lamborghini’s they left Silverstone in the same order in which they arrived in the drivers’ championship with Phil Keen and Adam Balon ahead of De Haan and Cocker.

The GT4 championship was still led by Dean MacDonald and Callum Pointon who head off the Mustang of Seb Priaulx and Scott Maxwell, while Martin Plowman and Kelvin Fletcher move up to third overall after a good performance.

The next round sees the British GT heads Donington Park, where Graham Davidson will be hoping to put behind him an unfortunate Silverstone event which saw his team mate being spun around and out of the race with only minutes left while in the lead of the race.