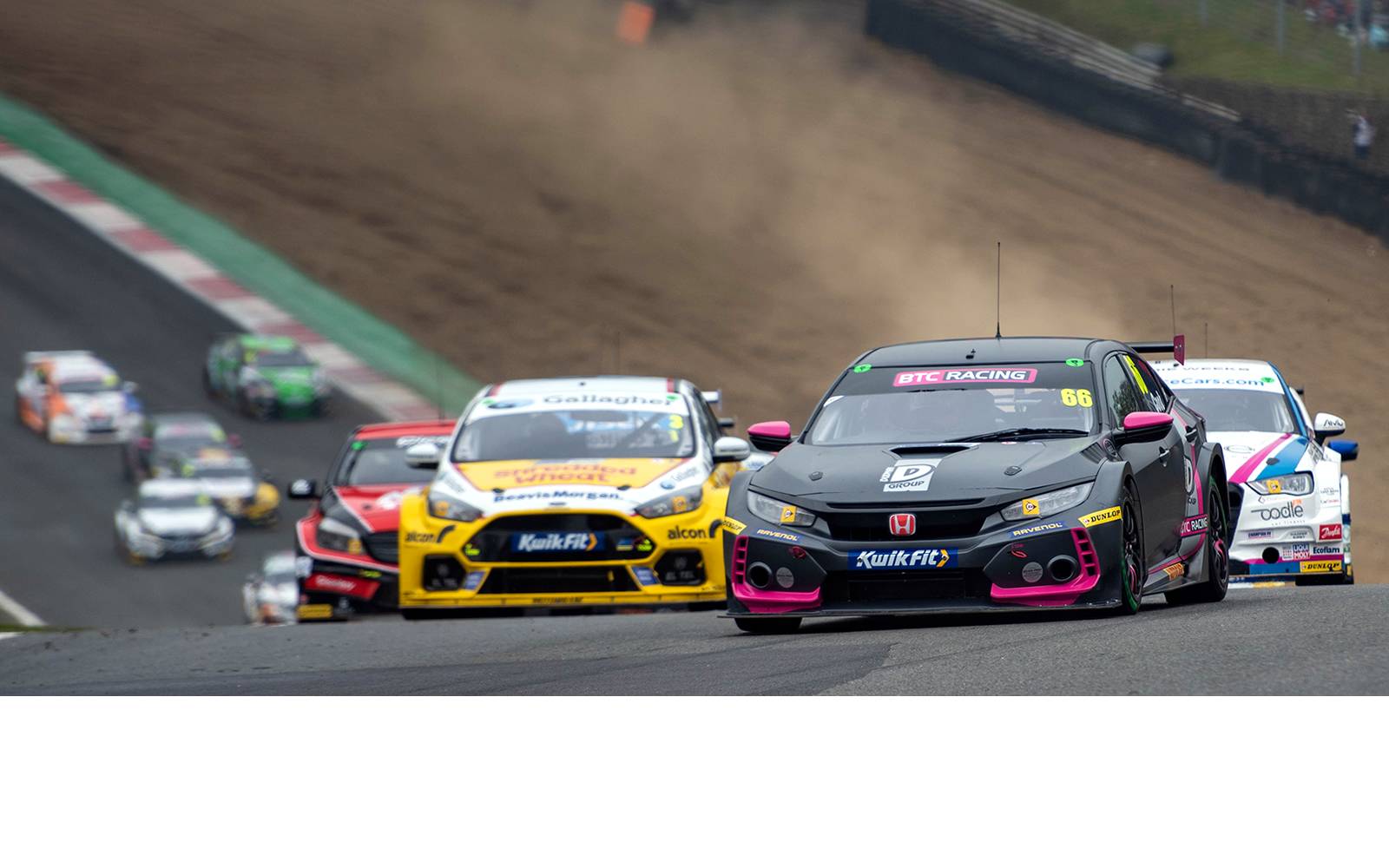 The first round of the new season of the Kwik Fit BTCC descended upon the Brands Hatch Indy circuit at the weekend with all the excitement and unknowns the opening round usually brings. New teams, new cars, returning drivers and different team line ups means predicting what will happen is nigh on impossible.

The two Halfords Yuasa Honda’s ended the last round on the GP circuit at Brands on a high with two wins for Dan Cammish, with a whole seasons experience with the new Civic there was a lot of expectations for them to do well.

Tom Ingram, last year’s runner up, would bring a new Toyota Corrolla to the grid replacing the older Avensis, and would be hoping to emulate the same success as he has done in previous seasons. While the winning team from last season, WSR, would bring three brand new BMW 3 series to the grid for the upcoming season.

In the first few practice sessions it seemed to be the brand new BMW 3 series run by WSR who would be the ones to catch over the weekend. With very limited testing over the winter period it was unknown how well they would do, but they seemed to have got everything right straight away with a lock out of the top three lap times in FP2.

For the qualifying session the weather turned and created a more level playing field with the session declared as wet. It was punctuated by a number of red flags, the first coming when Ollie Jackson in his new Motorbase Focus lost the rear around Clearways and ended up stuck in the gravel.

The new rules for the BTCC this season determine that if a driver is the cause of a red flag, then they will no longer be allowed to continue in the session once recovered, and will also lose their best lap time. A rule which both Sam Tordoff and Mark Blundell would fall foul of later on.

Tom Oliphant was the quickest at this point, but the wet weather master Ash Sutton soon put in a time to put him at the top, then putting in another quicker lap to cement his pole. Second place went to Jason Plato, who admitted that the wet session was the main reason he managed to get his front wheel drive Astra onto the front row, creating a tasty line up of the former BMR team mates for the first race.

The fog had descended on race day, causing a fair few delays to the racing meaning the BTCC would be the first race of the day. The track was left greasy by dense fog and had no previous races on it to lay down any rubber. In a throwback to the second race at the opening round last year, tyre choice would be a crucial decision.

The first few rows would play it safe by being on wets, but a fair few teams gambled on slicks knowing there would be no rain and the line could dry fairly quickly. The race to the first corner between the former team mates wasn’t as spectacular as most had hoped, the rear wheel drive Subaru getting the best of Plato’s Vauxhall which bogged down allowing a number of cars to get past him by the first corner. Things got worse for him as the officials deemed him to be out of position for the start and was hit with a drive through penalty.

The first few laps Sutton slightly increased his lead over the three WSR BMW’s but soon Josh Cook, one of those who gambled on slicks-shod tyres had put in the fastest lap.  It was clear the wets were now beginning to go off and Cook soon found himself easily getting to the front of the grid, and Jake Hill followed him in a great first race for him in the new Trade Price Racing Audi S3.

Despite a few spits of rain towards the end of the race which caused a few hairy moments for one or two drivers Cook, Hill and Chilton had carved out that much of a lead that nobody would be able to catch them. Just behind Aiden Moffat and Adam Morgan battled it out with an impressive Bobby Thompson in the Team Hard Volkswagen CC, with Bobby getting his highest overall finish of 6th.

Race 2 didn’t have quite the drama of the first race, the weather had cleared up, it was a definite dry track so there was no gamble involved in the tyre choices between wets and dries this time. Cook and Hill were on the front row on account of their finishing positions in the first race and it was Cook who made an impressive start getting away from the rest into Paddock Hill bend.

Sutton and Jordan also made impressive starts, with the later moving up a number of places from his 15th position starting spot. Cook sped away for the first few laps before the softer option tyre started to wear, the drivers had commented on how the colder weather makes them go off quicker.  Sutton and Jordan soon started to catch up and then quickly passed him, with Jordan looking determined to get himself a decent result. Once Jordan overtook Sutton he would dominate and lead until the chequered flag.

With Jordan racing away it left the rest to battle for the other podium places, Sutton got caught up by Hill, Jelley and Morgan and eventually Ingram to try and decide who would get those podium spots. Despite an impressive effort Jelley briefly got up into third but overshot his line and dropped back to sixth. It was left to Sutton and Morgan to fight it out over second and third positions with a photo finish across the line in which Sutton prevailed with the slimmest of margins.

Onto race 3 and Matt Neal had the Devil looking over his shoulder on what was his 666th BTCC race,  his car had been drawn out of the pack to take pole position for the final race of the day. Perhaps a chance for the Honda to take the spoils on what had been a relatively subdued day for the team.

However it was Stephen Jelley who took most people by surprise of the start line and ended up in the lead by the time the pack got to Druids. It stayed this way until Neal found an opportunity to get past, with Chilton following soon after.

The battle behind the leading three was typical elbows out race three shenanigans, it eventually led to Sutton being spun around at Graham Hill Bend by Jake Hill and into the barriers, despite what looked quite a lot of damage he managed to drag the Levorg back onto the track.

With Neal, Chilton and Jelley all squabbling this allowed Rory Butcher to slowly catch up and get past both Neal and Jelley as they tag each other through Clearways.  Chilton grabbed the opportunity to make safe his lead and took the chequered flag. He was later given a 5 second time penalty which would promote Rory Butcher to the top step of the podium.

Josh Cook comes away from the opening 3 rounds of the BTCC leading the points table with Chilton second. In third following maybe a surprisingly successful weekend is Stephen Jelley in the older BMW 1 series.  I don’t think many would have predicted him to be battling at the front so much, and with three impressively consistent performances over the weekend maybe he luck is changing after last season.

It is far too early to make any predictions about potential champions so far, and I am sure some of the more well established teams will slowly rise to the top over the coming rounds. It was a great advert for the championship overall with some close racing, and for the first time in a while the safety car wasn’t needed despite a fair bit of bumping and bruising in the final race.

The championship now moves onto Donnington Park in a few weeks’ time where last season Josh Cook managed a first and third placed finish. Perhaps he can recreate that and prove himself to be a real title contender.