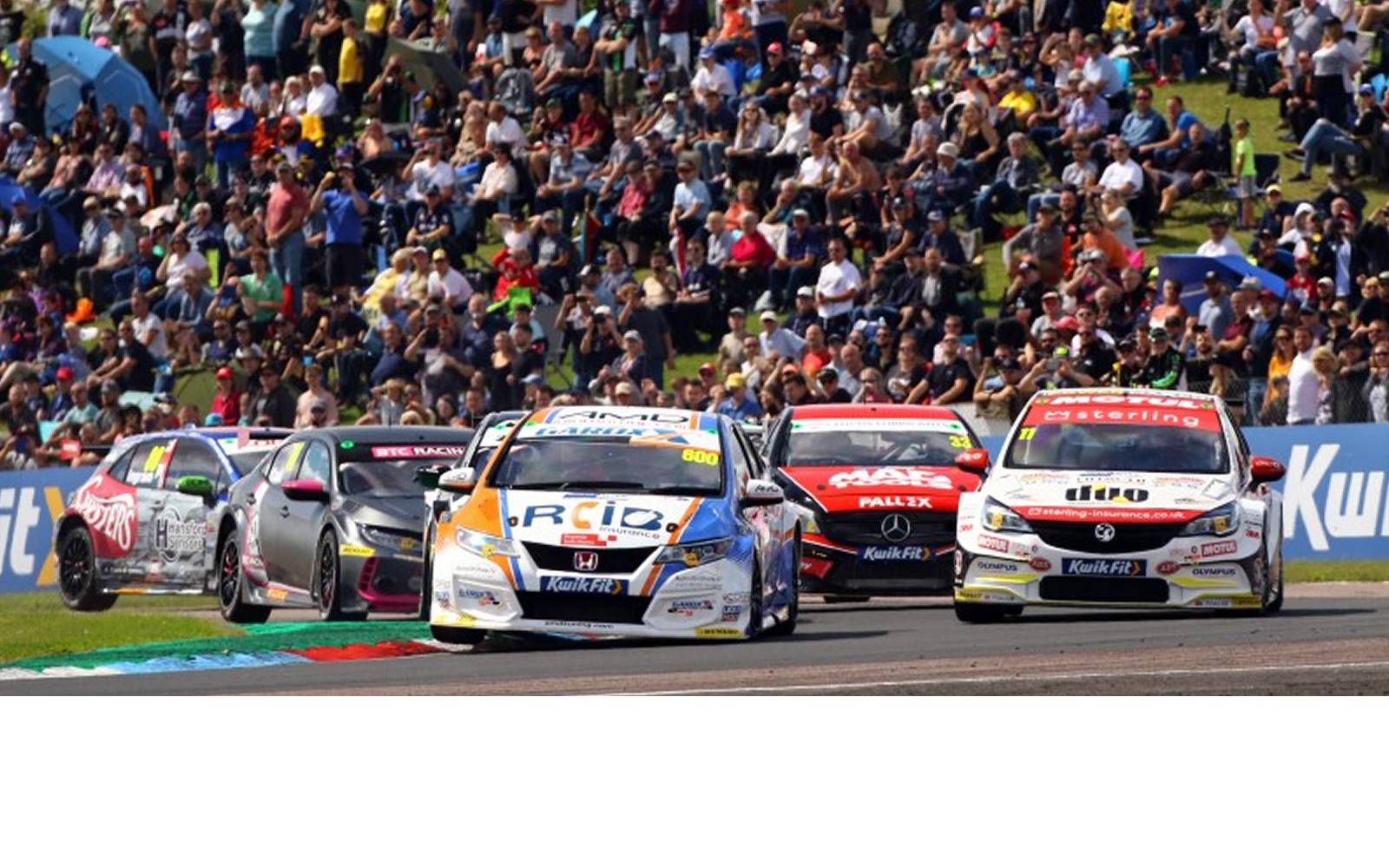 With Rockingham no longer on the BTCC calendar the teams returned to Thruxton for a second outing this weekend. The round in May was dominated by the WSR BMW’s but with a mid season change in the balance of performance, the advantage swung back in favour of the front wheel drive cars the track is more suited to. Despite there being a two week gap from Snetterton the battle between old team mates Plato and Sutton was being discussed by media and fans alike which filled the gap until this round.

Tordoff repeated his performance from the Thruxton round earlier in the season and put his AMD Honda on pole position, followed by Plato in second and Cammish in third. The first of the rear wheel drive cars would be Tom Oliphant in seventh place.

There was drama before the green lights came on in the first race, Jason Plato placed his car out of the grid box, a rule he fell foul of earlier in the season at Brands Hatch.

He would have to serve a drive through penalty which allowed Tordoff to maintain his first place and create a gap back to second. The first lap saw a few shuffles in the pack, Sutton and Turkington bumped together allowing Jordan to get past them both and try and make an in-dent on Turkington’s championship lead.

Another championship hopeful in Rory Butcher was having his own battle with Chris Smiley for sixth and seventh place. Smiley tried to get up the inside of the chicane, slightly losing control and bumping them both off through the run off area, Butcher clattered into the barrier, but didn’t do any damage to the car so was able to continue.

Tordoff held off Cammish and a vastly improved Morgan in his Cicely run Mercedes in third. In the championship stakes Jordan valiantly kept himself ahead of Turkington in twelfth to make a small dent in Turkington’s championship points lead.

Tordoff made a clean start in the second race, Cammish in second got a terrible start and dropped down the field into sixth place. Tordoff slid wide out of Church on the fourth lap, compromising his speed on the approach to the chicane.

Cook went round one side and Morgan the other, Cook prevailed and got the lead going into the chicane. The top two sped away as Tordoff, with success ballast, caused the cars to bottle up behind him. His resilience held out until the eleventh lap when Oliphant bravely battled it around the outside of him through Noble, Tordoff then dropped back further, the extra success ballast taking its toll on the tyres.

Josh Cook took the chequered flag ahead of Adam Morgan. Neal made a last ditch attempt to get past Oliphant going through the chicane and managed to get the last podium position by a fraction of a second.

There was more drama before the start of a race in the final race of the day. Potential championship protagonist Rory Butcher had clutch problems which meant he wasn’t able to take the grid.

The reverse grid draw put Rob Collard on his home track in pole and Dan Cammish beside him in second. Jordan made the best start off the line squeezing himself between Adam Morgan and Matt Neal to gain a few positions off the start line. Those places were soon lost as he battled with Sutton and Ingram through the complex and had to relinquish these positions after a good start.

Cammish moved himself into second place on the third lap, out-braking Oliphant going into the chicane. Spots of rain started to make the track a little tricky and on the tenth lap Collard’s car was a bit unstable on the exit of Church allowing Cammish to quickly close up and get past going into the chicane. What was a few spots of rain turned into a downpour over the final few laps, apart from a couple of sideways moments everybody managed to survive in the treacherous conditions. Cammish took the win ahead of Collard in second and the second Halfords Yuasa Honda of Matt Neal in third.

The weekend belonged to Honda, every race was won by the manufacturer, albeit each one being run by a different team. It was great to see Adam Morgan back at the top with two podiums and a fourth in the final race. A change in his engineering set up had clearly made a difference to his form at the start of the season, and will hopefully finish the last remaining rounds strongly.

Andrew Jordan fought hard to finish ahead of Turkington in each race. Turkington himself battled to make sure Jordan didn’t finish too far ahead, however the points lead has been cut to thirty points.

The championship now moves onto Scotland and Knockhill in a few weeks time.