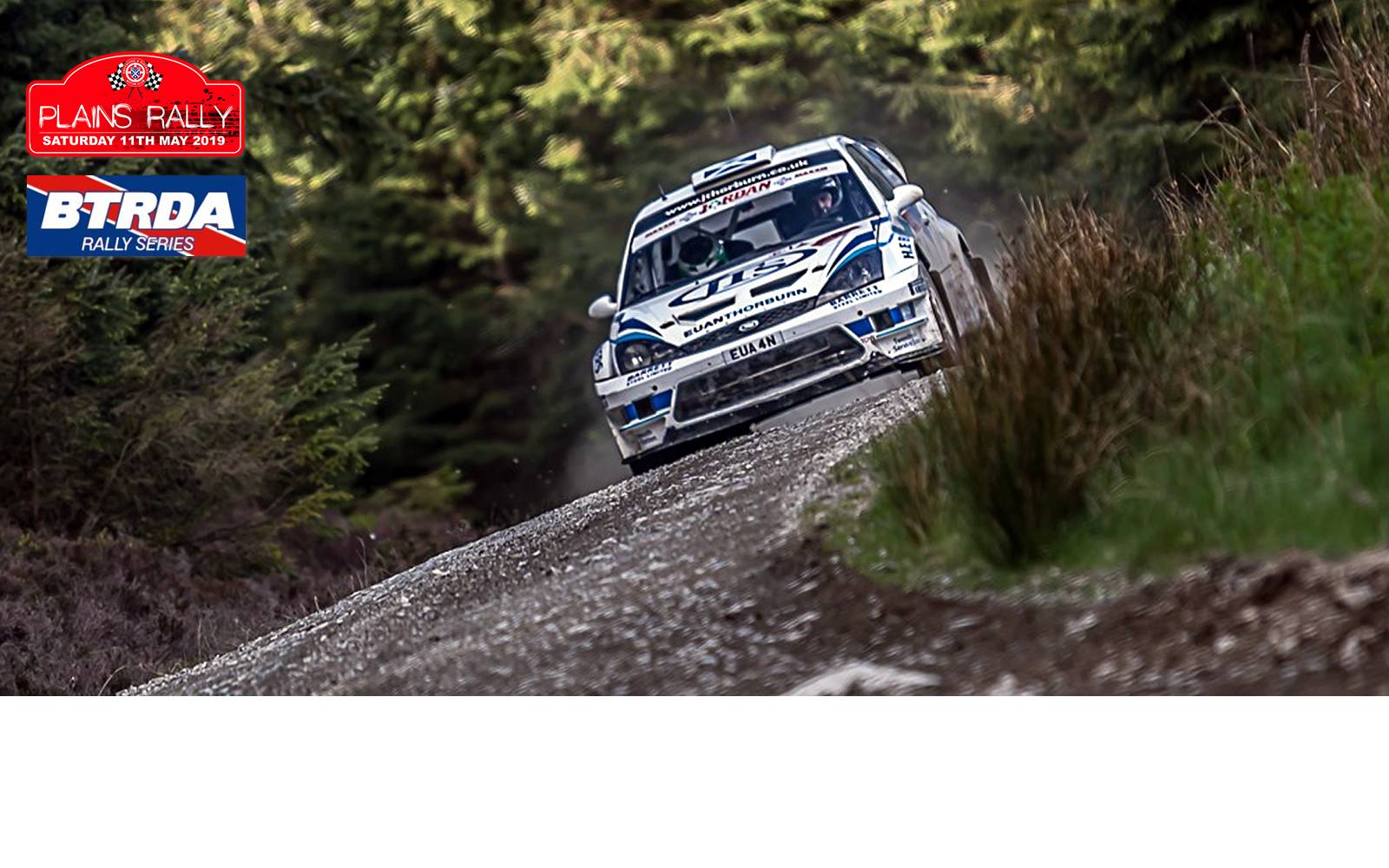 With a revised format this year, the Plains Rally organised by the Knutsford & District Motor Club returned to the forests of Mid Wales for Round 4 of the 2019 Jordon Road Surfacing BTRDA Rally Championships.

Opting to give the Dyfi Forest Complex a rest this year, the forestry allocation for the event featured five gravel stages totaling some 42 competitive stage miles. With double use stages in Dyfnant & Aberhirnant and a single stage in Llangower to round the day of with for the crews to contend with.

After dominating the first three rounds, current Jordan Road Surfacing BTRDA Gold Star Rally Championship leaders Euan Thorburn & Paul Beaton would once again continue on that trend on the Plains; leading a field of 119 Competitors away from the Shropshire market town of Oswestry.

Setting the pace from the off in their Ford Focus WRC, Thorburn & Beaton opened up the day by winning the opening 10km stage through Dyfnant Forest beating Stephen Petch in the newer Ford Fiesta WRC machine by just 14 seconds.

Petch has had a torrid season so far, retiring from the season openers, The Cambrian early on with a Diff problem, then ending up in a ditch at Round 2 The Malcolm Wilson. It wasn’t until Round 3 The Rally Nuts Stages that he actually got past the second stage of an event and eventually scored some points by finishing 3rd.

So the Plains was a chance to follow up his previous BTRDA outing with another result and so he set about chasing down that Scotsman, Thorburn who by now, at the midpoint in the season appears to be running away with it.

As the crews headed north towards Bala for the first run through Aberhirnant the sun continued to shine but metaphorical dark clouds were looming over the event by the time the majority of the field would reach the stop line of SS2.

Prior to the event the Aberhirnant Forest had been subject to high volumes of timber harvesting and has been for some time now, which in turn means a large volume of heavy plant machinery and vehicles using the roads. Over time it’s roads have gotten progressively worse and by the time the Plains Rally had arrived, the damage was already done to the extent where the roads in part were very rough, perhaps too rough to run a stage rally on.

To that effect the organisers whom work very hard to put on such a rally were left with very little choice, to run the stage or drop a substantial amount of stage miles? Either way the unfortunate situation that they found themselves in would result in negative press whichever path they were to choose.

Statement from Clerk of Course

Unfortunately we are not able to control all of the factors that have been referred to on some social media channels, especially the condition of the stages which had to be booked by us over 12 months ago, at a time when the stages we used on the event had been in an acceptable condition.

Aberhirnant between posts 4 and 9 was by the time of the event in some places in a poor condition. When I realised this I did request an alternate forest to reduce reliance on some of the rougher parts of Aberhirnant to deliver to competitors the required stage mileage.

That alternative allocation was not forthcoming so I was faced with a difficult decision – lose stage mileage to avoid the rougher sections of Aberhirnant or run with the Forest allocation. It is clear that some competitors might have preferred the reduced mileage to avoid the rougher sections, to them on behalf of the organising team I apologise.

As Thorburn bagged Aberhirnant to extend his lead over Petch by a few seconds, the battle for the third spot would start to take shape. Scott Faulkner in the Group N EVO IX would start off his day in third, but after the Dyfnant opener, Freddie Milne in the R5 Fiesta would jump up a handful of places to claim third overall in Stage 2.

Unfortunately for Milne his charge would be short lived as in the second run through Dyfnant he would be hit with brake problems and would retire from the event. This left the likes of Pat Naylor and Russ Thompson, who were both in EVO 9’s to take up the challenge with Faulkner for third.

On the penultimate stage of the rally, Thompson would make a final push to try and real in Faulkner, beating Faulkner on both of the final stages he would climb to 4th overall. Meanwhile Naylor dropped to 6th being overtaken by Richard Sykes who won the B13 Class (also in an EVO 9).

Ultimately, Faulkner would have enough time in hand to secure the third spot on the podium behind Petch and take the Class NR4 win and Production Cup honors for the third event in a row. He would now lie second in the Gold Star behind Thorburn.

Petch try as he might simply could not get the better of Thorburn on any of the five stages. Posting the second fastest time on all stages throughout the day Petch was simply the best of the rest.

Now that the Championship reaches the midpoint in the season, Petch has it all to do. If he is to stand any chance of challenging for the title this year; he must deliver on the remaining three rounds and hope that Thorburn faulters in some way or another.

And so Euan Thorburn who has previously won this event twice in 2013 & 2014 leaves the Plains with yet another victory under his belt, his 4th consecutive to add to his 2019 BTRDA campaign, is there no stopping this “Flying Scotsman”?

Once again we find ourselves having to praise the young George Lepley for yet another stonkingly good performance. His first season in a rear wheel drive car, his fourth BTRDA event in the Avenger and he continues to deliver the results.

Finishing 10th overall and yet again winning the SilverStar along with taking the Historic class honors by fending off the MK2 Escort’s of Tom Llewellin & Ross Whitlock and Will Onions & Dave Williams, surely he and Co-Driver Tom Woodburn are on for the championship win already?

Finishing 11th overall for the third event running, Callum Black alongside Michael Gilbey on the notes won the 1400’s class in their MG ZR. Once again in battle with the Talbot Sunbeam of Chris Powell & Jim Lewis (23rd OA), Black beat the whole 1400’s field on all but the last stage of the event for which Powell’s popped up to take just one fastest stage time.

Despite Callum scoring top points from the past three events, it is actually Chris Powell who leads the 1400’s class standings. Callum Black who did not join the series until Round 2 lies in 5th place with a few points to make up before he can possibly challenge Powell for the overall lead.

Powell who has a great track record on the Plains could not repeat the success that he had the previous two years at this event. Nevertheless a second place here is a another consistent result which enables him to continue to lead the Championship ahead of Steve Black.

Finishing 31st overall on the event, Steve Black and Co-Driver Paul Morris delivered another consistent 3rd 1400’s class finish in their Suzuki Swift, their 4th this year. Second in the standings behind Powell is good going. However, if they are to challenge Powell for that top spot they will really need to improve on their string of 3rd places on the remaining three rounds and will also have to keep an eye on that MG of Callum Black.

Onto other class winners now:

Robert Smith & Frankie Hillman (53rd OA) brought home their MK2 Ford Escort more than a minute ahead of the Honda Civic of Martin Walters & Marie Fletcher (57th OA) for the Class B10 win. While the MK2 Escort of Rob Wright & Terry Mallin (18th OA) secured the Class B11 victory ahead of John Rowlands & Caron Tomlinson (20th OA) by just 12 seconds.

The other Rowlands MK2 Escort that was being driven by Ieuan with Emyr Hall (24th OA) next to him had better success winning Class B12 ahead of the Vauxhall Chevette HSR of Nigel Cay & Fred Roberts (32nd OA).

Bringing the R5 Proton Iriz out for a spin was Theo Bengry & Les Forsbrook, finishing 13th overall the pair were the only B14 class on the entry list.

The next round of the BTRDA remains in Wales but heads further south for the Nicky Grist Stages which ultilises the stages of Military ranges.