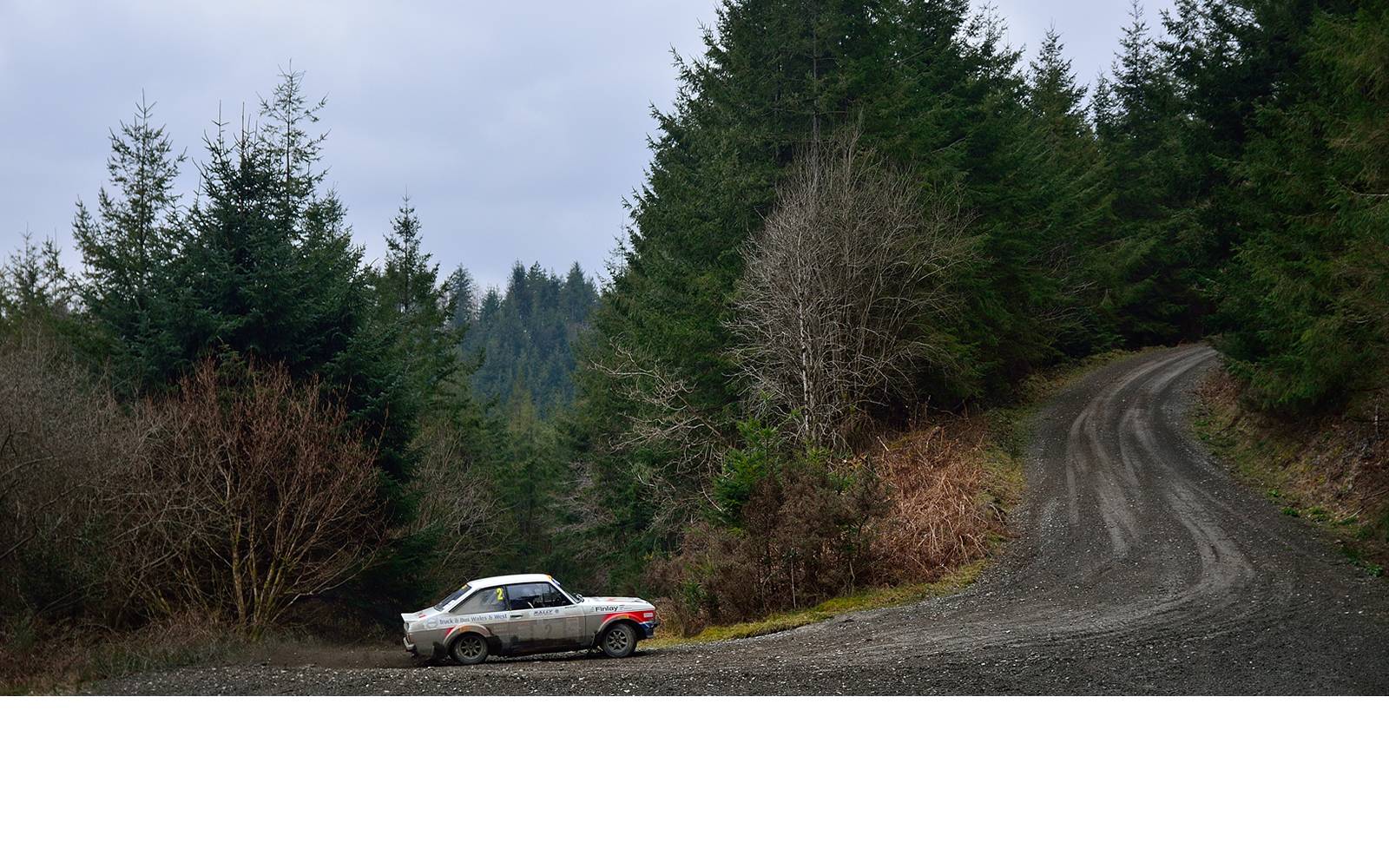 Organised by the Wolverhampton & Staffs car club, Rally North Wales which is now in its 60th year signified the beginning of the start in recovery for British gravel rallying, it was the first event to adopt the bold new initiative of the Rally2WD format; which is an attempt to rekindle support  for gravel rallying for both historic and two wheel drive cars.

“We are very proud to be the first event in the country to utilise the Rally 2WD event format and we are very excited to see how well the idea is received by competitors across the board this year,” says Clerk of the Course Richard Hinton.

The new concept was created in response to a decline in gravel stage rally entries over the past few season, which came about after the MSA, the UK’s governing body for motorsport put in place measures which prevented events from running anything but single fields running in anticipated performance order. This meant that the competitors who runs in the smaller classes in lower powered or historic cars would more often than not end up competing on rough cutup stages, after the majority of the field of say more powerful four wheel drive machinery  had passed over them. As one can imagine this is not a favorable way for a customer to spend their hard earned money, seeming to always getting the rough end of the deal with the increased potential to break cars, the customers started walking away from gravel stage rallying here in the UK. Events who had their hands tied by the MSA could do very little and suffered a huge decline in entry numbers, which in turn put event organisers and clubs under immense strain, putting them at risk financially, we saw event after event either cancelled or even disappear and confined to the history book altogether.

So how does this Rally2WD work on an event then?  …… It’s all fairly simple really.

The event will run two rallies back to back, the first for all two wheel drive cars including the historics and the second for the four wheel drive cars, it will be spread in two parts over a single day whilst still fully meeting all MSA requirements with safety cars etc On the 3rd of October last years it was announced that Rally North Wales would be the first to uptake this format.

“As one of the longest established clubs we need to ensure that our major event of the year is on a sound financial platform,” said Guy Weaver, chairman of WSSCC. “We see Rally 2WD as a way of building support for Rally North Wales by attracting back crews in two-wheel drive cars who have been put off by the changes to running order. When added to the excellent re-grading work being completed by Rally 4 Wales, we are confident that we can offer an event that will give everyone a tremendous gravel experience, no matter what type of car they are using.”

Simon Wallis from R2WD said: “There is a great deal of concern about the viability of gravel events for 2018 and beyond. Rally North Wales is a superb event, typically running over world-class stages. This will be an ideal opportunity to get competitors in all types of two-wheel drive cars, both modern and historic, back out rallying again.”

The event capped its entry at 120, on the 20th January it opened up for entries and it wasn’t long before they came flooding in as competitors signaled their support for such a concept and their return to gravel stage rallying. The early signs were starting to look good as the event was filled with reserves, mainly for the 2WD event; however sadly there was a poor showing on the 4WD event with only 11 competitors signing up. As in previous years, RNW was once again sponsored by North Wales Rally Services and it provided a compact event running over the ever popular world class stages in the Dyfi forest complex of Mid Wales; offering up 45 stage miles on National A & B permits with minimal road miles. It would be the opening round of the Fuchs MSA British Historic Rally, the second round of the Pirelli MSA Welsh Forest Rally and ANWCC Forest Rally Championship. Last year’s National A winner and BHRC runner up Nick Elliot; together with local boy and last year’s National B winner Osian Pryce returned this year, leading the crews away from Dolgellau for the first loop of three stages. An 8 miler in Dyfi awaited them at 8am followed by a slightly shortened Big Ray (due to damage to the stage route after a big thaw following a cold spell of snow) in the east of Dyfi and the longest of the stages Gartheiniog in the north which was 9 miles in length, all just before a sharp service in Corris. Despite the early start, we arrived at our chosen stage at approx 7am with about an hour’s hike ahead of ourselves in order to get to our chosen spots for the day. We really enjoyed the mornings action, the weather was holding out and it was great to see such a great mix of cars back out on the stages again. We didn’t bump into many people on our travels but the marshals that we did speak with were all friendly; however they were not particularly looking forward to their long day at their posts.

Nick Elliott was wide awake to start to the early morning and was leading Osian Pryce by just 13 seconds for the first loop, Ryan Barrett in third and Martin McCormack was in forth in the all Ford MK2 Escort lockout at the top end. Further down the classes it was great to see such a variety returning to the results sheets, the Hillman Imp of Ricky & Mathew Evans, a handful of Cortina’s from the likes of Bob Bean & Paul Makin, the Hillman Avenger of Barry Jordan and of course the gorgeous Porsche 911 peddled by Rikki Proffit was out once again and they were all class winners on the day. By the stop line of SS6 Gartheiniog 2, the final stage of the day, Nick Elliott had a 41 second lead over Martin McCormack (1st Historic) who along with Paul Barrett (2nd Historic) had passed Osian Pryce (3rd Historic) for the runner up spots on the overall podium. Now we were facing long drive back ahead of us and so we didn’t think that the 11 4WD entries warranted the longer day out in the trees, especially when we could be half way home by the time they were due to finish. This is one area of concern for the safety crews and marshals, it is a long day to be out on duty for, events that adopt this format really must ensure that the 4WD part pulls in strong enough numbers to justify keeping these volunteers out all day for.

So as we look back on the event and the Rally2WD format did it work?

Well yes of course it did, it done exactly what it set out to, it made an event viable once again with strong numbers of two wheel drive cars and it got the historic back out competing on our stages. I’m sure that with a little development say in the way in which the entries are split across the two events, the 4WD event could co inside with the 2WD on the same day, if only they attract the numbers, but then again if the demand for 2WD only events is strong could this be a route to go down?