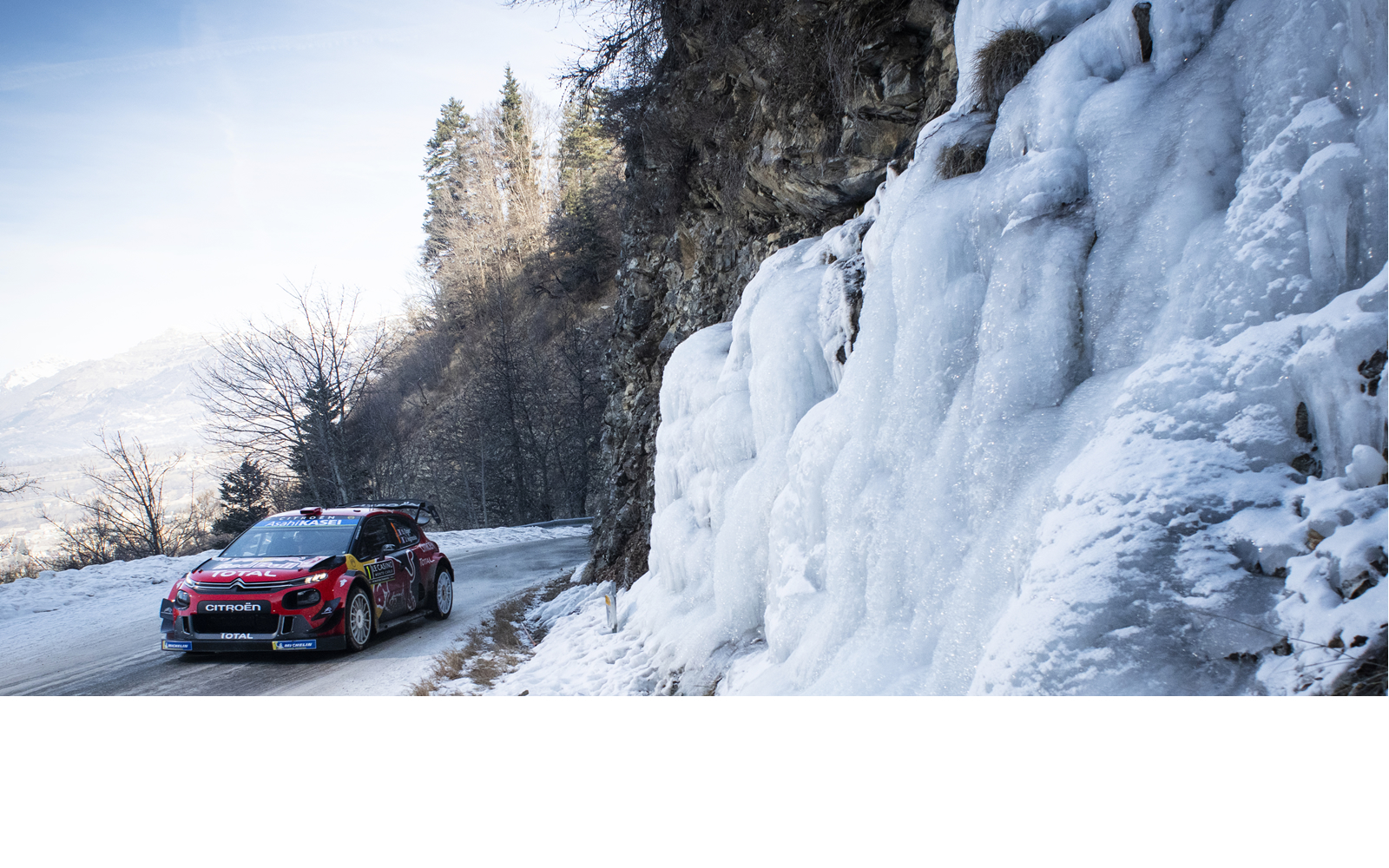 The infamous Monte Carlo Rally signalled the start of the 2019 FIA World Rally Championships and let’s face it there’s no better way to kick things off than the unique challenge that the Monte brings.

More than two months had passed since last season’s thrilling final Down Under in Australia ended with Seb Ogier winning his sixth title; but this year he was with a new team Citroen and would be behind the wheel of the C3 for the first time driving it in anger. Last season the Citroen camp was not such a good place to be, with poor results and a troublesome car, one did question why the champ Ogier had jumped ships?

After being released from his contract with the Citroen WRT following a series of offs; Kris Meeke found himself searching for his future. In step Tommi Makinen with a one year deal driving a Toyota Yaris, which he snapped up straight way, could this be his last shot?

Closed season winter testing sessions by the top teams had been aplenty and the world’s best drivers were all ready for the off on Thursday morning at Shakedown in Gap; where Kris Meeke who was joined by ex Haydon Paddon co-driver Seb Marshall to set the fastest time.

With the drivers all warmed up; the Monte challenge was to begin with two night stages as the man with the No1 on the door, Seb Ogier blasted off into the darkness. Toyota’s Ott Tanak was the quickest out of the blocks in SS1 La Bréole – Selonnet; but for others, the challenge of just getting thru the opening night stages proved all too much.

First in trouble was M-Sport’s number two driver Teemu Suninen, hitting a patch of ice he found himself in a ditch on the opening stage and to add insult to injury, the young up and coming talent that is Kalle Rovenpera who is driving an R5 Skoda Fabio for his WRC2 Pro assault this years did the exact same thing, only slamming into the back of Suninen’s ditched Ford Fiesta.

The atmosphere out on the stages was immense as last year’s top three drivers: Ogier, Neuville and Tanak battled it out in the darkness. Thierry Neuville took the stage win on SS2 Avancon – Notre-Dame-du-Laus and the crews returned to service in Gap with Tanak leading Ogier by +9.1 seconds with Neuville lying in third.

Tanak “I’m not sure it is anything special.

A few seconds here or there is nothing.”

The next morning tyres were very much the main thing on everyone’s minds, today was supposed to be the longest leg of the event with 125km of stages ahead for the crews to tackle to the South East of Gap. The unique and ever changing conditions of the Monte means that Tyre choice, which is the most critical factor on the rally, is always a lottery.

Selecting their rubber for the morning loop of 3 stages; crews headed out for an opening 20km stage of the day SS3 Valdrome – Siottier; however due to large volumes of spectators it was cancelled. This did not go down well with the drivers or the teams, everyone had selected their choice of Tyres for the morning based on the full loop of stages. After being re-routed to SS4 Roussiex- Laborel, drivers were highlighting to that effect and Toyota’s team boss Tommi Makini was very vocal about his opinions on the stage cancellation.

Last year Hyundai came close to reaching their goals but fell short of the Korean brands expectations. Thierry Neuville was in his closest fought battle for the title with Ogier but the team also did not deliver on their goal of winning the manufactures title either. Team boss Nandan was out and replaced by Adamo for 2019. Also sighting that last year the other drivers in the team were under performing and were not getting the results that they required, changes had to be made. Haydon Padden controversially was out, Andreas Mikkelsen got the lawyers involved to keep his seat and Dani Sordo got the programme that suited him but where was this supporting role for Neuville going to come from?

Well none other than “THE GOAT” (The Greatest Of All Time) that is, 9 times Champ Sébastien Loeb who found himself without a WRX programme this year, following the PSA’s Group decision to remove Peugeot’s works backing from the series, in some eyes Hyundai absolutely had to act and sign him up.

Fresh from the sand dunes of the Dhaka; just days before the Monte; Loeb found himself in the seat of the i20 Coupe WRC for the very first time and it wasn’t long before he was getting to grips with this machine. On SS4 Loeb took his first stage win outside of his beloved Citroen family for whom he had been a member of for so long. Shooting up the leader board from 8th to 4th in the very first stage of the day, this stage win he then repeated once again for SS7 the afternoon running of this stage.

Friday was not a good day in the Toyota camp, Ott Tanak who had started the day in the lead was off the pace today, a broken wheel added to his wows; an issue that hit team mate Kris Meeke twice as well, costing him more than four minutes.  At the end of the first full day of competitive action out on the stages around the Gap region, local hero Seb Ogier led the field for his new team Citroen. In the C3 he was just 2 seconds in front of Hyundai’s leading driver Neuville who’s afternoon did not go so well. Dropping some 20 seconds on an overshoot in SS6 Valadrome – Sigottier, the opening stage of the afternoon, this enabled Ogier to build up a lead over him, Neuville then spent the remaining two stages of the day clawing back the lost time.

Ogier “Only myself and Thierry are clear in front but in Monte-Carlo things can change quickly, It’s important to be on the limit tomorrow but at this rally the limit is safer than elsewhere. I can do a bit more, but in Monte a strategy that is a little more careful can pay off.”

Saturday was a new day with two loops of two stages, we don’t know what the Toyota team were serving up for breakfast that morning but whatever it was it appeared to have an effect on their drivers. Ott Tanak was back on form winning both of the morning stages, that’s better, this is what we expect of the young Estonian!

Teammate Meeke set the second fastest time behind Tanak on SS9 Agnières-en-Dévoluy – Corp. Seeing his teammates getting back up to speed encouraged Jari-Matti Latvala who decided that he too would get in on the action and posted a second fastest time on SS10 St-Léger-les-Mélèzes – La Bâtie-Neuve, 5.8 seconds behind Tanak. By mid day service this had placed Latvala in third overall with Tanak moving up the leader board to 5th and Meeke in 6th.

Tanak “For sure, we keep doing our best. The stages were generally okay but I had a fancy moment at the beginning where I hit the black ice, there is so much ice and it is quite slippery.”

Back out for afternoons loop Tanak and Meeke repeated their actions from the mornings run of the Agnières-en-Dévoluy – Corp stage. Ogier and Neuville were still going at it and ended the day with Ogier having a lead of just over 4 seconds over Neuville, setting things up nicely for the move south to the stages closer to Monte Carlo and for the final Sunday morning showdown.

Loeb had overtaken Latvala and was now sitting proud in third, doing exactly what Hyundai had hired him to do, Loeb must have been pleased with his performance given the short amount of seat time in the i20.

Loeb “For sure I am enjoying it. I was happier with the car this afternoon, I could push a bit harder as we found a better set-up in service. I enjoy the race.”

M-Sport was having a dismal event, with their number two Suninen already super rallying following his off on Thursday night, things got even worse for them. Welshman Elfyn Evans crashed out of sixth position in his Ford Fiesta, sliding down a steep bank causing extensive damage to the car spelling the end of his rally and saying good bye to any potential points.

The only good news to come out of M-Sport on the Monte was that Britain’s Gus Greensmith was to take the WRC2 Pro win in the R5 Fiesta. Greensmith on his first WRC2 outing dedicated this win to former co-driver Craig Parry, who was forced into retirement from rallying after a crash in testing for last year’s ADAC Rallye Deutschland.

Greensmith “I’m dedicating this win to one man who deserves it as much as me. We did this together”

And so the event moved south to Monte Carlo and headed into the final day of the 87th Rallye Automobile de Monte Carlo, the first round of the 2019 FIA World Rally Championships. Sunday’s route to the north of this world famous harbor featured legendary locations such as the Col De Turini and the iconic series of hairpin bends on the Col De Braus stage. The stage was set with four stages to be tackled before the winners could be crowned, who was going to take the first win of 2019?

Ott Tanak continued his stage winning ways, adding to his clean sweep on the previous day he started off with the stage win for the first run over the Col De Turini and followed that up with another on SS14 La Cabanette – Col de Braus, his sixth consecutive stage win, leap frogging teammate Latvala and Monte veteran Loeb for the third spot.

Neuville set about hunting down Ogier and once the first two stages were done, he wasn’t really any closer. But on SS15 he made his move on Ogier; slashing the gap to just +0.4 seconds heading into the power stage and his final chance to take the win from him.

The stage was set for the closest end to a WRC event ever, everyone thought that the Power Stage in Sardinia last year was close being 0.7 seconds between the pair but that was nothing to what was happening and right here and now, could Neuville snatch it like he did in the dust of Sardinia?

Toyota’s Kris Meek set the benchmark and walked away with the maximum Power Stage points but everyone was glued to the timing screens as both Neuville and Ogier gave it their all. Ogier although having a throttle sensor problem had done it, his sixth Monte win and the closest finish in the history of this iconic event. This victory marked the 100th World Rally event win for Citroen and was a truly magical way for Ogier to start this chapter of his career with the French team.