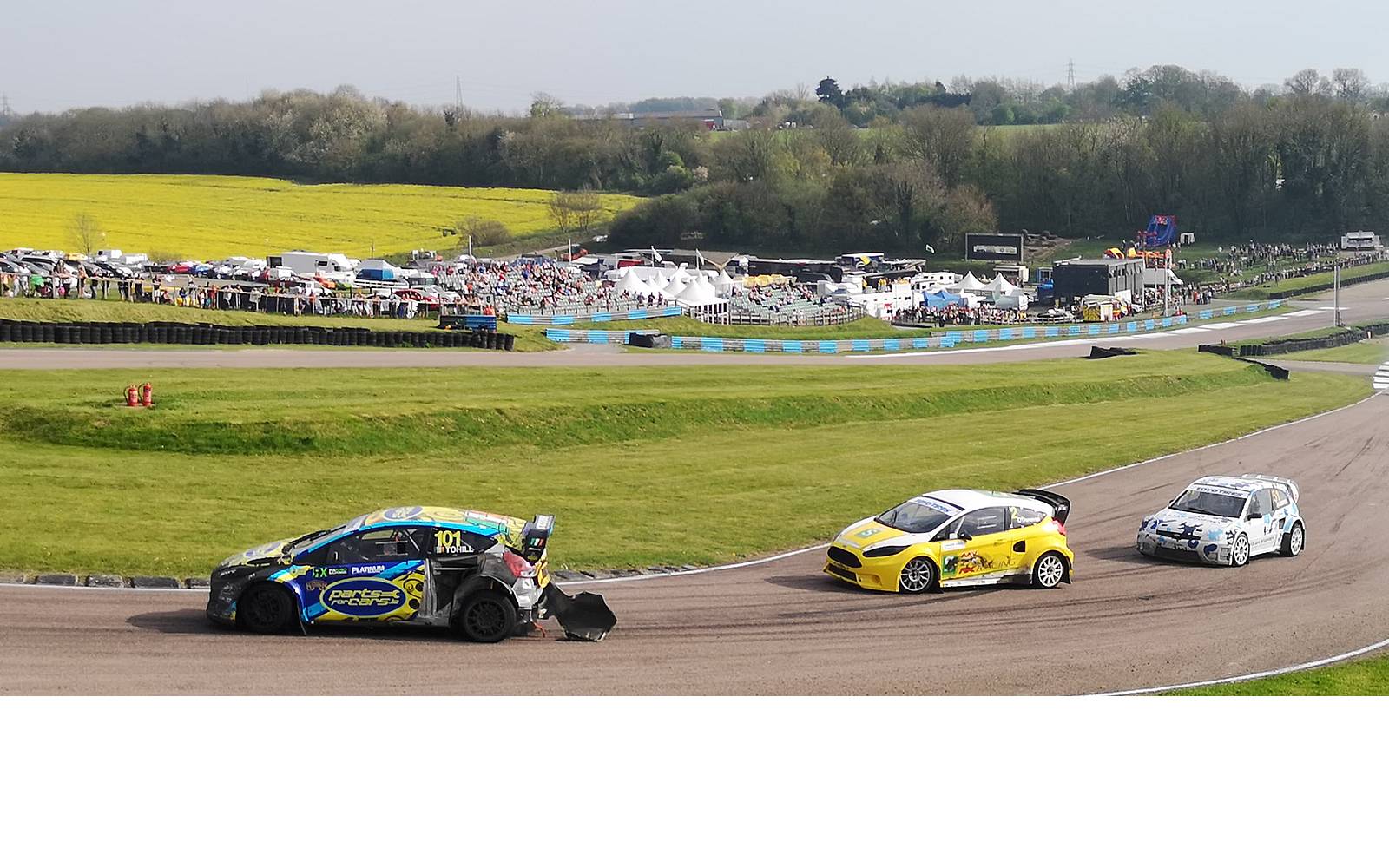 In the bright sunshine a big crowd flocked to the circuit which is at the heart of every British Rallycross fan, Lydden Hill to watch some Easter RX action.  It was almost a clean sweep for Irishman Derek Tohill who took the win at Round 2 of 2019 Toyo Tires Motorsport UK British Rallycross Championship.

The two times European Champ topped the timings in the opening qualifying heat ahead of Round 1 winner Julian Godfrey. However, Q2 did not go so well for him, a jump start resulted in a double joker lap leaving Ollie O’Donovan to get the better of both him and Godfrey. O’Donovan led the scoreboard heading into Q3 where Tohill then re-composed himself to take Q3, which put him in second place on the grid for the final.

Godfrey who had dominated the open round at Silverstone had swapped the Mitsubishi Mirage for an older Ford Fiesta, I think that he missed having the Mirage and it appeared to have hurt him at Lydden. He opted to take the joker lap straightaway while the others set about fighting for the lead.

O’Donovan led the final up until he jokered on the fourth lap allowing Tohill to take the lead and his first ever win in the British Rallycross. Godfrey who had a technical issue managed to finish 3rd on the podium ahead of Jake Harris (4th) and Pat Doran (5th).

Following on from his opening season win at Silverstone, local boy Tristan Ovenden made it two out of two in the Supernationals class to extend his Championship lead.

Dominating all qualifying heats in his Renault Clio V6, Ovenden as expected led off of the start line in the final ahead of Paige Bellerby, who chased him for the whole race in her Lotus Exige.

Bellerbys second place finish here at Lydden moves her up into second in the standings, while a charge up through the field by Darren Scott landed him third on the podium in his Citroen C2.

Returning to the UK for another battle in the Suzuki Swift Juniors was Latvian Robert Vitols. Vitols topped the qualifying and took the lead in the final from pole position but disaster struck on the fourth lap, his Swift had technical woes which handed the win to round 1 winner, Luke Constantine ahead of Patrick O’Donovan.

Elsewhere in the Swift Sport, Championship leader Dominic Flitney repeated his round 1 victory. On pole for the final was former Junior RX driver Will Layton following on from his brilliant QF and SF performances but Flitney got the better start and led the race from start to finish to extend his lead in the standings.

It was another victory for reigning Champ David Bell in the BMW Mini Series but that didn’t come without a fight from Drew Bellerby. Bellerby was “ON IT” throughout the Qualifying heats and won her semi final to start from pole position in the final.

Although Bell made the better start and led the race, Bellerby played the joker lap perfectly to take the lead. However, disaster struck her Mini on the penultimate lap when the right rear suspension failed handing the victory back to Bell. Former Junior RX Champ Bradley Durdin along with Martin Hawkes joined Bell on the podium in second and third respectively.

Despite the obvious value in these truly epic Retro Rallycross cars of years gone by, the drivers are here to race them not parade around the track, this was evident from the slamming into the tyre wall of Rob Gibsons Metro 6R4.

Fresh from his podium finish in Abu Dhabi, World Rallycross star and Monster Energy RX Cartel driver Liam Doran made an appearance in the Retro Rallycross, driving his father’s Ford RS200 to a dominant victory.

From the second row of the grid Doran was on fire, blasting his way in front of another RS200, that of Steve Harris; with Roger Thomas in the Metro 6R4 rounding off the Retro podium. In fact Doran’s pace was so good that he even posted the fasted lap of the whole weekend.

Full Results can be found on: https://www.rallycrossbrx.com/results/

The British Rallycross Championship heads to Pembrey, Wales next for Round 3.