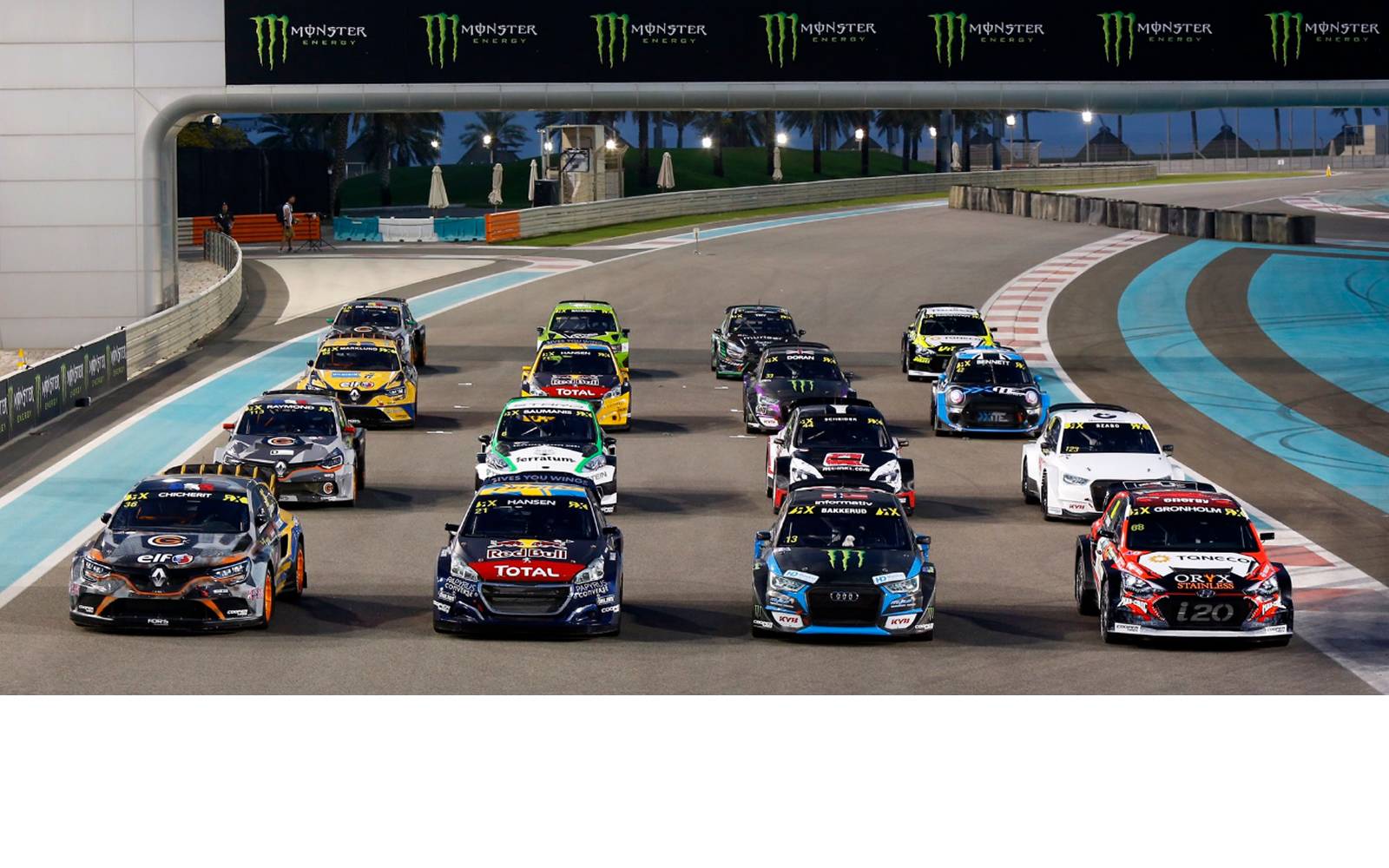 The off season for FIA World Rallycross was a bit of a torrid time to be truthful, the whole Electric debate and the Manufacturer works backed teams exits caused some major upheaval for all. However, that is all behind us and the 2019 season is now upon us and starts off with a brand new venue in Abu Dhabi at the Yas Marina Circuit.

16 permanent drivers arrived in the sweltering heat of the UAE all raring to go with some familiar experienced drivers mixed in with some new, whom are making the step up to the sports pinnacle level this year.

With no reigning champ, Johan Kristofferson and the VW Works backed outfit this year, the WRX returns to its private team battles, the title fight is well and truly wide open and we are ready for a new name on the trophy.

Free practice would be the drivers first taste of this new circuit and our first insight into how our runners and riders were to perform. The temperature was hot “about a million degrees” according to some, air temperature was approx mid thirties and track temperature about 45, peaking to nearly 60 at times; so in the words of that very 80’s hit song by Glenn Frey “the heat is on!”

In free practice the fun and games would start already with tyre choices, for most rounds in the Championship the drivers get 8 sets, but for this one it was increased to 12. This allocation included wets, which are really not much use in the middle of a desert where there is little rain but instead sunny blue skies and high temperatures for most of the year.

So for those drivers whom already had a decent amount of seat time in their rides, they utilized these “disposable” wets to learn the new track, opting to save the slicks for the racing. Others whom were a bit fresher had to sacrifice a set of slicks in order to fine tune their car setup further.

The start straight is ever so slightly downhill and was proving a little tricky for some to get the right RPM in search of that optimum grip level on launch. Second gear was appearing to be a popular method and those whom were burning up the wets were seen to be bogging down a little at times.

A couple on interesting parts of the track had been identified by the drivers in the free practice. Turn one was blind coming off of the non-joker standard lap, turn 4 was also blind on the entrance and the jump, which was a flat 5th gear at some 140kph, just fell away leaving the drivers a little funny in the stomach.

The Hyundai i20 of Niclas Grönholm topped the timings here with team mate Rennis Nitiss right behind him, third was Timmy Hansen in the now family run Peugeot 208.

Finally it was time to go head to head for the racing and it began with the first qualifying heats of the season. The draw was purely random so each race was to be a real mixed bag of competitors, hence we had absolutely no idea who the quick guys were going to be, although everyone must have had their own inkling.

Although Andreas Bakkerud had drawn pole and won the very first race of the year in his Audi S1, for his newly formed team The Monster Energy RX Cartel, it was the perfect start for the Hansen boys who topped Q1 with a one-two.

Timmy Hansen posted the fastest cumulative time and grabbed the first 50 points ahead of brother Kevin in second. Niclas Grönholm continued his pace from the free practice to take the third fastest.

As the sun set on the track the temperature dropped slightly and the flood lights came on for our first ever taste of RX at night. Timmy Hansen continued to dominate setting the fastest time once again, brother Kevin dropped back a bit to 6th. While the second fastest was that Audi S1 of Bakkerud, who came in ahead of reigning Euro RX Champ Reinis Nitiss for Team GRX.

From these early indications the Hansen Peugeots looked to be, as in previous years, a good package but the Hyundai’s of the Grönholm RX outfit are also proving to be a decent weapon, especially in the hands of Niclas and Reinis.

And so for the opening days action of the 2019 FIA World Rallycross Championship the intermediate points table is led by Timmy Hansen with a full house in Q1 & Q2.

Hansen is driving the Peugeot 208 which was used during the early part of the 2018 season, it is the car in which Sebastien Loeb won the Belgium RX in, so we already know that this is a good winning car. He leads Andreas Bakkerud with Kevin Hansen in third. There still remains a further two qualifying heats in day two ahead of the Finals, where the first winner of the new season will be crowned.