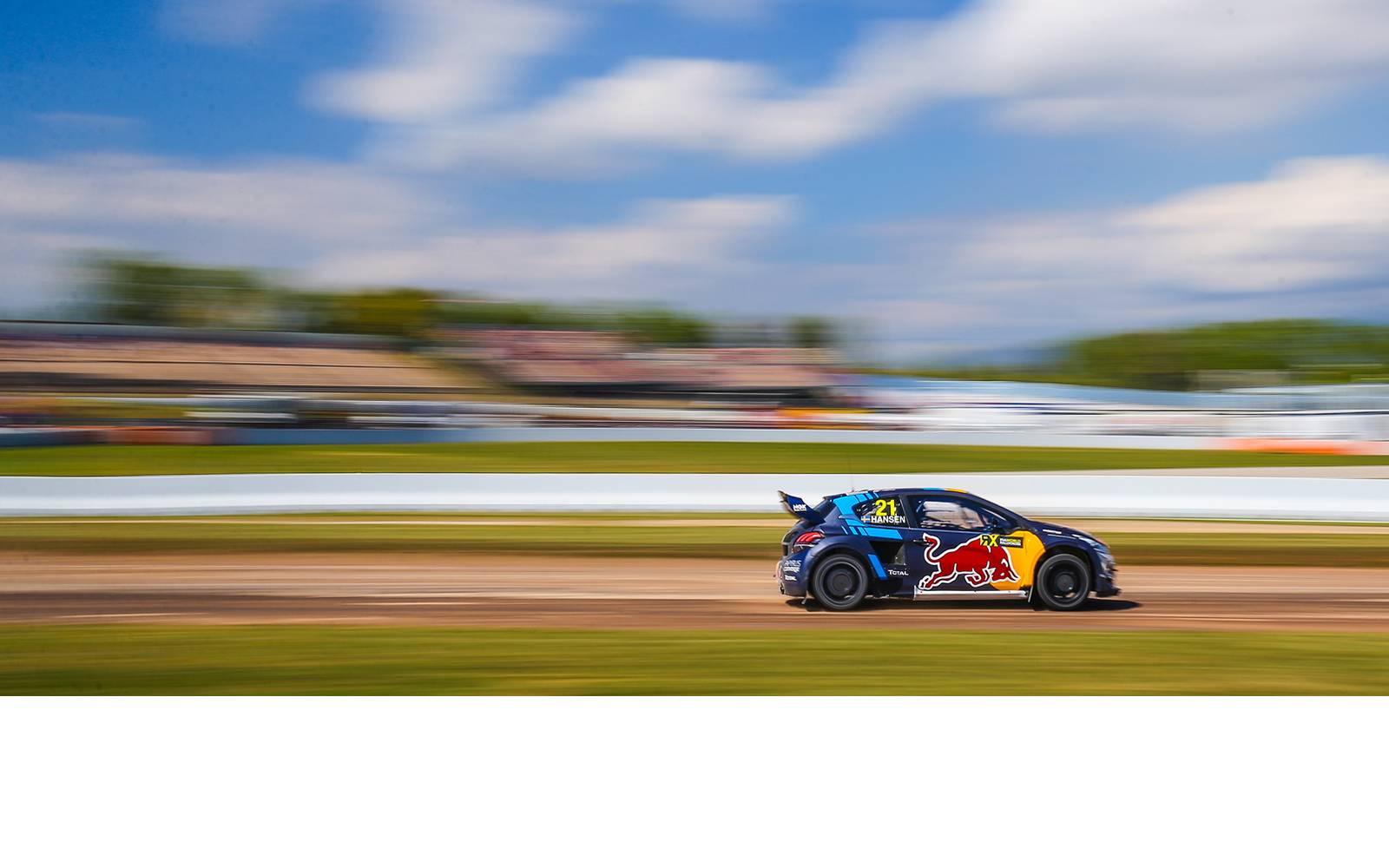 The second round of the FIA World Rallycross Championship at the Circuit De Barcelona in Spain was a thrilling event for one particular Swedish family. After dominating the opening days qualifying sessions, the Hansen brothers set about making the World RX of Catalunya one to remember.

It was a reverse grid for Q3 with the fastest guys from day one heading out onto the track first. With track evolution and the possibility of it getting faster as the heats progressed, would it mean that yesterdays slower guys would be able to post better times today?

Timmy Hansen continued where he left off by blasting off the grid to take the lead into T1, leaving brother Kevin and Andreas Bakkerud to indulge in a bit of rubbing on lap 1. Bakkerud played his joker well on the first lap, getting the better of Kevin to take second place behind Timmy, who crossed the line with a time of 3:06:07. Despite having radio issues, Timmy thought that Q3 was even better than the previous days performance.

Heat 2 was a chance for Timo Scheider to get back into the mix and it was all looking good as he took the lead into turn 1. However it would all go wrong for him on lap 3, slowing up with a technical issue he handed the lead and win to Anton Marklund. Scheider did managed to crawl around the circuit to finish, after all a slow time is better than no time! Race winner Marklund was feeling much happier, praising his team for doing a great job fixing his broken suspension overnight.

Heat 3 was a case on “GAME ON” for Niclas Gronhölm, using 2nd gear off the start line he delivered a smooth, calm drive to take the win. By posting the fastest lap of Q3, his heat time was just +226th slower than Timmy Hansen best lap from day 1.

The final race of Q3 was a bit of a disaster for the Xite RX Racing team, Oliver Bennett made a jump start in his Mini Cooper and on only lap 2 his steering broke yet again! This left team mate Chris Hoy in the Fiesta to fight it out with another Fiesta, that of Jani Paasonen. Hoy opted to joker on lap 3 and appeared to have carried the speed up the inside of Paasonen on the merge to possibly take his first WRX heat win. Unfortunately Paasonen closed the door on him, Impact was made, Hoy had his first taste of proper RX combat and the win went to Paasonen.

As the competitors headed into the final qualifying session everyone seemed to step things up, Unfortunately for Hoy, he bogged down off of the start, while Scheider absolutely nailed Bennett at the end of lap 1 to take the win.

Heat 2 saw some classic RX action once again heading into turn 1, the start was a little messy with Paasonen and Karai both hitting the corner sideways. Karai came off worse and stalled it in the gravel. The GCK boys were fighting it out up front, Raymond clipped the tire wall heading into his joker on the final lap; it was team mate Guillaume De Ridder who took the win.

The contact continued into heat 3, Timerzyanov touched the Megan of Chicherit sending him sideways into turn 1, while up front Baumanis led the pack. Timerzyanov and Doran had a big fight for second place coming off of the merge on Lap3. Timur blasting up the inside of Doran who then went sideways spraying gravel up behind him. Baumanis took the heat win which he dedicated to his mother whose birthday it was.

The final race of Q4 presented Timmy Hansen with a chance to take a clean sweep of TQ’s (Top Qualifier), Marklund made a jump start which put him out of contention and it was looking like a fight between Timmy and Gronholm. Timmy lead all the way from the first lap to the chequered flag ahead of brother Kevin, they both secured pole for their semis. Timmy scored a maximum points haul of 200 as his rewards for topping all four Qualifying sessions, only three drivers have ever done this.

Timmy Hansen and Niclas Gronhölm lined up on the front row for the first semi final, Timmy was on the favoured inside line and knowing how crucial the first corner is, he once again found the grip to grab the lead. Chicherit had a bad start and choose to joker straight away, allowing fellow GCK driver Cyril Raymond to pass.

Timmy who had four fresh tires on posted two consecutive fastest laps of the day on Laps 3 & 4 and by the penultimate lap there was a GCK three car train at the back. Timmy lead Gronhölm the whole race and on the final lap Raymond overtook Timerzyanov at the merge to take the last place in the final from this impressive drive of his.

Kevin Hansen lined in P1 next to Andreas Bakkerud but Janis Baumanis got the better of Bakkerud into turn 1. The opening lap from Kevin was storming, posting the fastest lap of the day thus far, three tenths quicker than his brothers lap in SF1.

The final lap of the race brought all the action, Baumanis who was coming off the joker was desperate to make it into the final. He was late on the brakes and nudged Szabo to take the third spot, out front Kevin Hansen passed the finish line ahead of Bakkerud.

So it was a family affair on the front row of the grid for the final, Timmy once again took the inside line into turn 1 and Kevin shut the door of Bakkerud. Bakkerud was all over the back of Kevin throughout lap 2 but that was nothing compared to Grönholm, who was being held up by Baumanis. Gronholm was desperate to find a way past, but unfortunately he had been held up so much that he had to settle for 4th.

In the spotters tower Susanne Hansen was on the radio telling her boys to give it their all. Bakkerud was unable to pass Kevin; who had pushed so hard to stay in front of him and so for the first time in World Rallycross History two brothers finish in P1 & 2 in a final.

Timmy takes his 6th Victory moving him up to third in the drivers’ standings (38 pts), Kevin (56 pts) still leads the championship ahead of Niclas Grönholm (48 pts). This Hansen one-two here in Spain puts Team Hansen MJP (94 pts) at the top, some 18 points ahead of round 1 leaders GRX Taneco (76 pts) in the team standings with Monster Energy RX Cartel (48 pts) in third.

The Championship move on to Belgium at a brand new Spa circuit for the Spa World RX of Benelux.