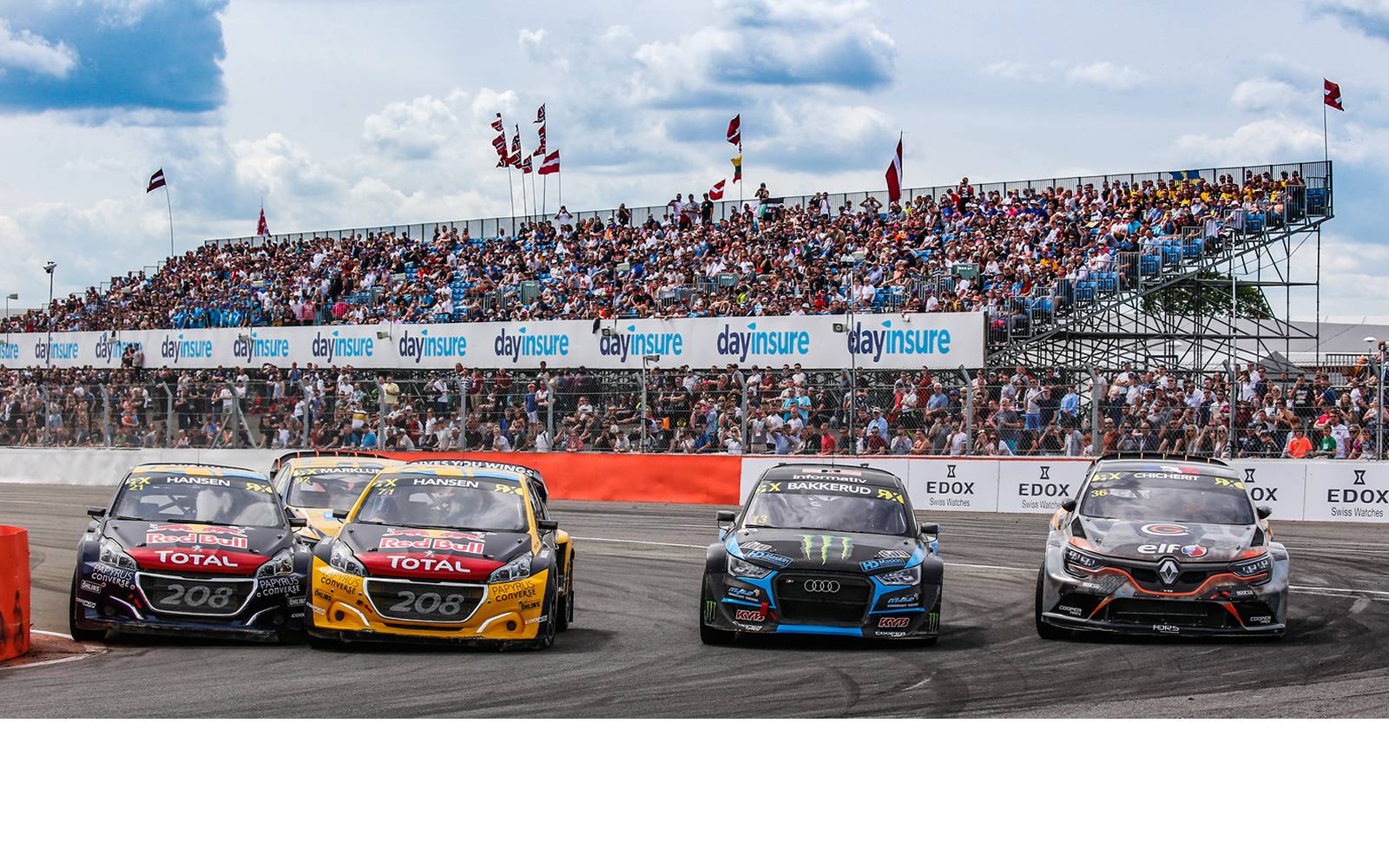 Returning to Silverstone, The Home of British Motor Racing; the FIA World Rallycross Championship arrived in the UK for the fourth round.

As part of the SpeedMachine festival the rallycross forms the main highlight of this action packed, high performance, adrenaline filled weekend, which is tailored for the petrol heads and motorsport fans alike.

Although Higgins has not raced this season, he at least has previous here at Silverstone; which is where he won the BRX title on his last outing at the backend of last year.

Following the departure of Rokas Baciuška, the ES Motorsport team found themselves without out a driver for this race, so did not take part. After another hospital check up following his Appendicitis, Niclas Grönholm was not given the all clear to race, so back in the GRX hot seat once again was that stand out man of Spa, Joni Wiman.

The opening day wasn’t a particularly eventful one in terms of close RX combat like what we witnessed last time out in Spa. This Silverstone circuit at just 0.972km in length also isn’t exactly a fast track, but it is fairly technical, with a huge jump that delivers a hard landing. Timmy Hansen held the lap record from last year and Monster Energy RX Cartel’s Andreas Bakkerud won here last year, so could we see a repeat of that this year?

Mark Higgins, Krisztian Szabo and Timo Scheider lined up on the tarmac grid for the first heat of Q1 to open up the RX Battle in Britain. It was local hero and James Bond stunt man Higgins who got the jump at the lights on the World RX regulars.

Leading into T1, Higgins and Szabo had a nice little battle on the opening lap but it would be Szabo who would take the first blood.

“It is always good to start the weekend with a win, but I have to work on my start”

From the off, the Hansen boys meant business in race 2, Kevin on the outside led brother Timmy into T1 for the race lead on the first lap.

The brothers kept the racing between them clean and safe and on the final lap merge, Timmy emerged to take his first race win of the weekend ahead of Kevin, start as you mean to go on lads!

The GRX substitute (Joni Wiman) appeared to be on form in race 2, leading Brit Oliver Bennett on the first lap. Lap two saw Bennett late on the brakes of his Mini Cooper RX bumping into the back of Wimans Hyundai i20 in his eagerness to get past, this would earn him a stewards reprimand.

However in the background the GCK Renault Megane RS of Guillaume De-Ridder was making steady progress, which earned him the race win on merge of the last lap.

Round 3’s winner of Spa, Timur Timerzyanov absolutely annihilated the competition off of the start line in heat 4. However maybe he was being just a little bit too eager to get his weekend off to a good start, as on the exit of Turn 1 he went wide, handing the lead to Anton to Marklund.

Top Free Practice runner Marklund was being chased down by Andreas Bakkerud and despite running wide towards the end of the final lap, he managed to hold off to take the final win of Q1.

“It was a driver mistake on the last lap, I am P*ssed off, considering I was fastest in free practice.”

Aa the day progressed, the track evolved getting dryer and faster in Q2, the fastest from Q1 went first and once again it was the dominant Hansen brothers at the front.

Timmy had a bad launch but managed to out-brake Kevin into Turn 1 for the race lead. Timmy took the win with a time that was 1.8 seconds quicker than Q1.

“I had a bad start, maybe sleeping a bit when the green lights went on, but I braked later than Kevin into Turn 1, the car suites me”

In the second race, Russian Timur Timerzyanov had a little contact with Guillaume De-Ridder. De-Ridder pushing him wide, this put Timur back down to 5th, which wasn’t ideal.

On the last lap Krisztian Szabo laid down a great lap, the fastest of the day up until this point but that wasn’t enough to take the heat win. Joni Wiman who was in the car that set Niclas Gronholm of to a great start in Round 1, Abu Dhabi; got the better of Szabo on the merge taking the win just before the finish line.

“I knew it was going to be tight, we made some big changes to the cars diff, which seems to have worked for me.

Race 3 was a battle for the Brits, Oliver Bennett and Mark Higgins; with Jani Paasonen getting right in the middle of them.

Into Turn 1, Paasonen got up the inside and pushed Higgins wide leaving Bennett clear to take the lead. Bennett drove on to take a clean safe win.

” To win in Q2 in front of my home crowd is amazing, fingers crossed!”

The final race of Q2 was a chance for the likes of Timo Scheider and Janis Baumanis to put things right following on from their poor Q1; and they did just that.

Scheider getting his Seat Ibiza hooked up lovely to post not only the fastest lap of the day on Lap 3; but to take the race win from Baumanis and second in Q2, sandwiched in-between the Hansen brothers. This result moved Scheider up from P16 in Q1 to P7 going into the overnight intermediate standings.

Timmy Hansen leads the overnight intermediate standings ahead of brother Kevin following his perfect Q1 & Q2 wins. What a great start to their race weekend, can they continue on their performance into day 2 like they did in Spain?

“Happy Days, The Hansen Brothers are back!”